In life,  no matter what you are doing; no matter how much experience you have at your job; no matter the advanced degree that require post-nominal acronyms after your name; no matter if you’ve been doing it—whatever it may be—for 4 years or 40 years…there will always be someone who does it better.

Or, at least you THINK someone is doing it better than you.

Ah, the fine art of comparison.

There is a girl I know, whom shall remain nameless. (Hint: she bears a strong resemblance to me.) She is an amazing young lady. She is creative, funny, loyal, beautiful inside and out. She excels at school work; taking high school math classes in middle school. She gets grounded so rarely, she doesn’t really understand what it means.

Athletically, she excels there too. She has been known to become interested in a sport and, with very little training, she goes out there and makes the All-Star Team. Where she got that gene, I will never know.

She was born with another gene too…the hyperactive comparison gene. I know where she got that one.

She can be highly critical of herself. Everyone may tell her she is has natural talent at a sport, but if she meets another girl, who has had years of training and practice, then she immediately perceives that girl “better” than herself. She doesn’t think she can compete. Because they are better, and she isn’t. 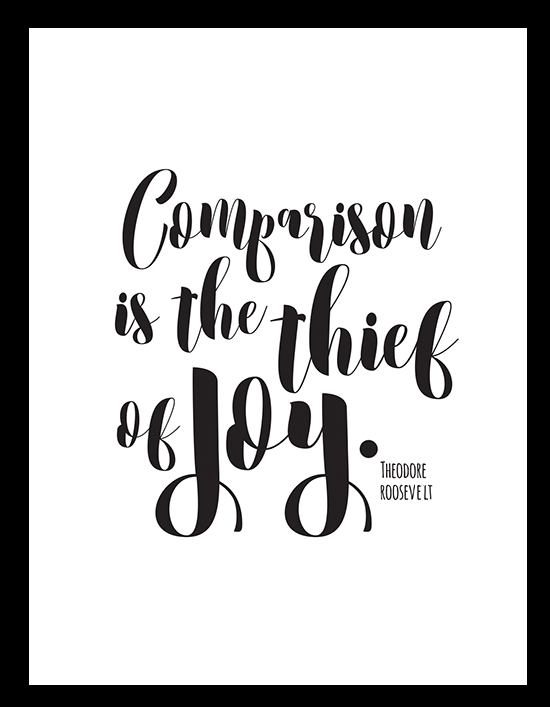 When I was a mother of toddlers, I would compare myself to the fellow mom at the playground who seemed to have it all together. That mom always had wet wipes and snacks…the good kind. She never yelled at her kid. Her hair was done, not just thrown up in a messy ponytail. And, she actually was wearing something other than yoga pants! She had it all together, and I was a failure because I compared myself to my perceived perfection of her.

But, listen closely. She was never perfect. She was probably comparing herself to me; wishing she too could wear yoga pants and no makeup. And pull it off.

So, when comparison has you trapped, here are a few life truths to remember:

Still have trouble comparing yourself to others? Think about this:

…And, Michael Jordan was cut from his high school basketball team. He once said, “I have missed over 9,000 shots in my career. I have lost almost 300 games. On 26 occasions I have been entrusted to take the game winning shot, and I have missed. I have failed over and over and over again in my life. And that is why I succeed.”

Like the graphic pictured above? Get a free printable by clicking on the image. Print it out as a reminder to do your thang…and stop comparing yourself to others.

LINKING UP at Holley Gerth.