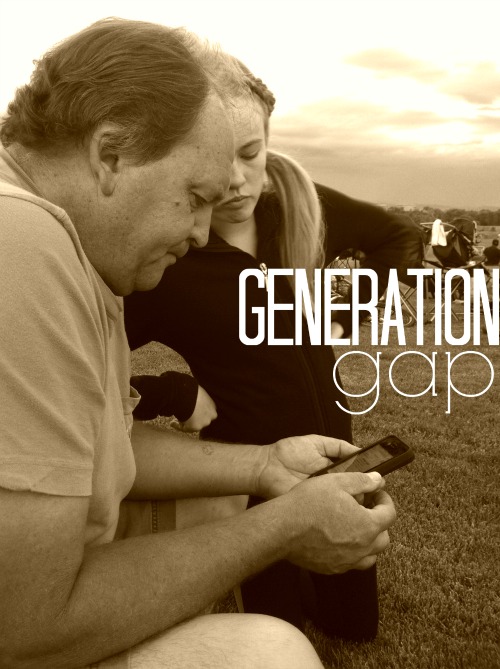 Husband and I were talking with our girls about jobs we have had in our lives. I told my 7-year-old I worked for my hometown newspaper when I was 18-years-old.

She asked, “What’s a newspaper?”

After my bewilderment wore off, I explained a newspaper by using an example I thought she might have seen on a TV show.

“Oh,” she said with a questioning look. I can read between the lines. What she really meant was, “Why would anyone read a newspaper when you can get your news online?”

I am sure it happens to every generation. Parents and kids don’t connect on technological levels. This is why my 12- year-old gives her Dad lessons on how to use his iPhone (evidence above).

My kids have never used a phone with a cord, except in a hotel. They will never laid on their bed, gossiping with a friend while twisting the cord around their fingers. We haven’t had a land line in our home for seven years. On a recent trip to the Aviation Museum in Pensacola, Florida I had to “teach” my girls how to dial on a rotary phone that was on display.

They take for granted instant internet access. Remember dial up? One of our TVs even has wifi for surfing the net. Remember having only four channels to choose from, and if you wanted to channel surf you had to get up and turn the dial on the TV?

They have never watched a movie at the drive-in. That is just sad.

They have never played a cassette tape in a boom box. They have never rushed to the store to buy a new release of an album by their favorite artist. They have never laid on their bed, listening to the entire album while looking at the album art. Instead of buying a single 45 record they download one song at a time. They only own CDs because I have bought them. They will never make a mix tape.

They have never taken pictures of their friends on a film camera…then waited a week to get the pictures back. Instead they use Instagram, digital cameras, an iPod, or phone with a camera. It’s all instant.

They don’t write letters, they text. Come to think of it, they don’t talk on the phone either, they text.

I wonder what technological advances will be different when my kids have kids of their own.

Will they say, “When I was a young we got our news on the Internet.”

And will their kids ask, “What’s the Internet?”