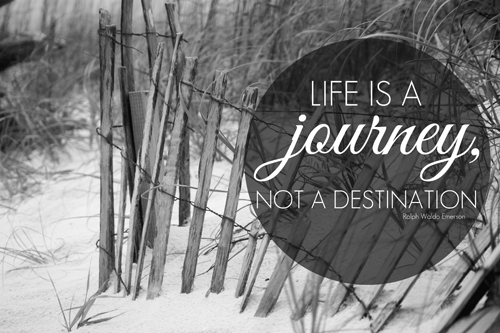 Ralph Waldo Emerson is credited with saying, “Life is a journey, not a destination.”

And, every time I get lost, I quote this to my kids…and my kids roll their eyes at me.

“Mom, you need to stop using MapQuest.” says my 7-year-old daughter. So, I stopped, and started using GoogleMaps. Last week we were in Florida. Even with the help of GoogleMaps and Siri as the navigator, we still got lost and needed to make a few U-turns.

I haven’t always been directionally-challenged. I used to the be the Queen of Directions. I was the navigator while someone else drove the car. I think the older I get, the less I care if I get lost. We have created some of the funniest and interesting stories from our misadventures. Don’t believe me? Read this.

But, my kids still hate making U-turns. They see U-turns as mistakes, and they hate making mistakes. U-turns aren’t mistake; they are just a change in course. When you U-turn, you recalculate where you are heading. And the beauty is, you can U-turn at anytime…unless there is a sign in the road that says otherwise.

One of the most radical examples of U-turns in life was that of Matthew the tax collector, and one of Jesus’ twelve disciples. (Matthew 9:9-13) I love this story.

As a tax collector, Matthew (also known as Levi) was hated. Tax collectors were known as corrupt and greedy. Because they were known as dishonest, they could not testify in a court of law. But, an invitation, a U-turn from Jesus, changed all that.

Jesus said, “Follow me.” Matthew stood up and did just that. Despite Matthews sinful past, he made a huge, scandalous U-turn when he met Jesus. You could say Matthew U-turned his life around. Instead of collecting taxes for the Romans, he collected souls for Jesus.

Sometimes we just need a good U-turn in life to get pointed in the right direction. This is true in life and when traveling on unfamiliar streets out of state.

Another clever person once said, “Too often we are preoccupied with the destination, we forget the journey.”

[Tweet “Heaven is the destination, but the journey is with God.”]

I wrote about our trip to Pensacola Beach, Florida on my other blog, Colorful Travels. Yes, I have more than one blog. You can read about the details of our trip there.

4 thoughts on “Sometimes You Just Need to U-turn.”